First Deemster sworn in as a Judge of Appeal in Guernsey 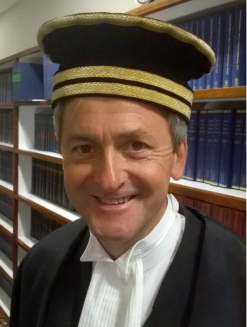 The ceremony was undertaken at the Royal Court in Guernsey and attended by other judges, jurats and members of the local legal profession.

The warrant of appointment from Her Majesty the Queen was read whereby Her Majesty granted 'unto Our Trusty and Well-beloved David Charles Doyle, Esquire, the Office and Place of Judge of Appeal of Our Island of Guernsey under the Court of Appeal (Guernsey) Law 1961: to have, hold, exercise and enjoy the said Office unto him the said David Charles Doyle, during good behaviour.'

The Oath of a Judge of the Court of Appeal was administered to the First Deemster in the French language. The First Deemster promised that while exercising the office of a Judge of Appeal of the Bailiwick of Guernsey he would 'preserve and maintain all the laws, liberties, usages and ancient customs of the said Bailiwick … and … administer good and concise justice to all, without regard of persons.'

Sir Richard Collas, the Bailiff (Chief Justice) of Guernsey welcomed Deemster Doyle as a judge of the Guernsey Court of Appeal stating:

'This is a historic occasion. Never before has a permanent judge from the Isle of Man sat in a judicial capacity in this Bailiwick although Deemster Doyle and his predecessors have graced our bench by sitting here on certain ceremonial occasions such as the swearing in of a Bailiff or a Law Officer. Indeed I recall one famous occasion when the newly appointed Deputy Bailiff Day referred to then Deemster Kerruish seated in his splendid crimson robes and judicial wig as having dressed as Father Christmas. Today, on behalf of the Royal Court and the judges of the Court of Appeal, I am delighted to extend a very warm welcome to Deemster Doyle immediately before he takes his seat on the bench of our Court of Appeal for the very first time.

'Last year we marked the 50th anniversary of the establishment of the Court of Appeal of Guernsey, recognising the significant contribution the Court had made to the administration of justice and the development of jurisprudence in the Bailiwick. The Court’s successes have only been achieved thanks to the considerable intellect and judicial qualities of the eminent judges who have sat on the Court.

'Members of the Royal Court, you will be pleased to learn that Deemster Doyle is no exception. He has been a full-time judge on the Isle of Man since 2003 when he was appointed Second Deemster. In 2010 he was appointed Her Majesty’s First Deemster and Clerk of the Rolls and President of the High Court. When he is not in court, he monitors legal developments across many jurisdictions throughout the world and very kindly draws my attention to leading decisions of relevance to our communities. He is a respected author of professional articles that are frequently published and has often been called on to lecture at judges’ conferences and even at the Oxford Union, on more than one occasion. When relaxing, he finds time for walking, running and growing some of the heaviest pumpkins and potatoes in his island.

'Professionally, the role and responsibilities of the First Deemster are very similar to those of the Bailiffs in this island and the other place. He is also the Deputy Governor of the Isle of Man and acts in place of the Lieutenant Governor in the latter’s absence or during any vacancy in that office. Unlike the Bailiffs, he does not preside over a legislature nor does he sit in the Legislative Council of the Isle of Man although the First Deemster did so until 40 years ago. The Deemsters continue to participate in the annual midsummer meeting of the island’s ancient legislature, Tynwald, on Tynwald Day where they promulgate the laws by reading them out in English and Manx.

'Mr Doyle, you will be pleased to learn that our modern laws are all enacted in English although you will from time to time have your knowledge of the French language tested when reading our older laws or referring to our ancient Norman customary law. It is in the origins of our separate legal systems that you will find the most differences between our respective jurisdictions.

'You will be familiar with the challenging mixture and variety of the case work of our Courts, on the one hand the full range of criminal cases where, like you, we apply legal principles and laws modelled on their English counterparts and on the other hand, the complexities of trust and chancery types cases that arise from the international financial services of our respective islands.

'In short, we hope that you will find the workload of a Judge of the Guernsey Court of Appeal to be similar to what you are accustomed to in your courts. I am sure that our islands will benefit from our judges sitting occasionally in each other’s courts. You will find the caseload to be as rewarding as it is challenging. I have no doubt that you will be able to make a significant contribution to the administration of justice in this Bailiwick where your knowledge of judicial life in a small island jurisdiction will be most helpful.

'I am also delighted to welcome this morning your wife Barbara. I hope that you have enjoyed the weekend and that Mrs Doyle will be encouraged to visit us again when accompanying you on your visits here.

'Judge of Appeal and First Deemster Doyle, thank you for accepting this appointment, we wish you well.'

After his swearing in ceremony Deemster Doyle, sitting with Clare Montgomery QC and Robert Logan Martin QC, proceeded to hear 4 appeals, Kelly, Guilbert, Hastie and Channing v the States of Guernsey. Judgments in respect of all appeals were delivered before the completion of the week’s sitting. In Kelly the Guernsey Court of Appeal applied, amongst other authorities, Caldwell-Camp 2003-05 MLR 505 (the leading Manx guideline case in respect of the importation and supply of Class A drugs).